What Does Romans Say About Motherhood?

The book of Romans was written a mere 56 years after Jesus was born, and it was written by a man who would later be imprisoned and martyred for his faith. Not only that, but it was written to the Roman church as a whole, not to a particular person or gender. So what could this book possibly have to say to mothers in any season of life? Hebrews 4:12 tells us, “For the word of God is living and active and sharper than any two-edged sword.” God has something life-giving to speak to us through His Word in every season of life. In this season of mothering, whether it’s a season of babies or teenagers or empty nesting (or anywhere in between), the book of Romans and the Author of life have something powerful to say to you. Join author Abbey Phipps as she dives into the book of Romans, exploring verses in a new light…the light of motherhood. Journal your way through a set of “going deeper” questions each day, allowing God to bring each verse to life in a new way, and in just the right way for the season of life that you’re in.God has something to say to you, mama. Are you ready to listen? 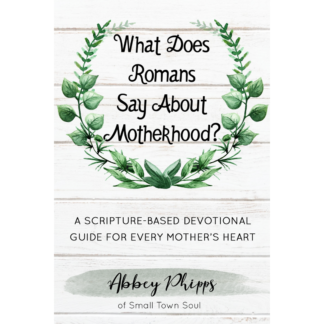 You're viewing: What Does Romans Say About Motherhood? $11.89
Buy book